Each of Ślusarski’s paintings is a new oneiric challenge. He begins work on the composition with a conceptual, very careful drawing, which contains all the most important forms for the vision of the whole. We meet in his studio in Częstochowa, where he persistently implements his next work. In the conversation he states that he is looking for “mysticism for gray everyday life”. He paints, moves on the border of two worlds – real and magical. His art is himself. It is a life path of improvement, a path full of symbols. The artist thinks that everything is related in life. It connects, converges, although each of its sequences has its own peculiar paths.

According to Ślusarski, time permeates everything, merges various images from reality, transforming them into reality. The artist’s painting is a great vision of an eternal journey extending over a number of implementations – finding peculiar places in his own imagination, the possibility of wandering in it ‘teleportation’ from one to another, to the next dimension. Being, being at the same time everywhere we want – as in a dream. These illustrative montages – painting creations, the author titles literary, e.g. “Clockwork Orange”, “Dreams will become real”, “Evening coated with the glow of the moment”. Important motives of his imaginations are primarily moving, mobile representation of strange objects or worlds (“Memoirs of travel”). These objects move or are subject to visible deformations, transformations, shifts (“Big Moving”, “In search of their own identity”). Vehicles are trains pulled by locomotives (“Octopus”), bikes with unusual wheels (“Wolność i Swoboda”). There are also winged flying characters (“Dreams will become real”), stratospheric balloons shining like stars (“Lunar sphere”). In the picture “Rustic Friendship” appears a clockwork mechanism working like a “death machine” leading torturers to pleasure, just like in “Penal Colony” – a story by Franz Kafka. There are also pull-out drawers containing fragments of city buildings, part of the lunar landscape, sailing ships sailing on the sea, and home spaces (“King Size”). The artist often paints winding stairs, fairy-tale wooden houses on wheels, metal globes (“New Idea”), stone labyrinths of streets shown from a bird’s-eye view, in which you can wander and endlessly wander, ships sailing in blue skies with sails shaped like shells, mechanical bird constructions (“In search of own identity”). 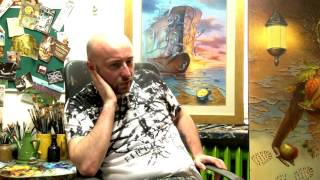 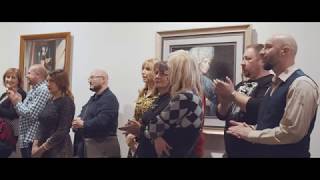 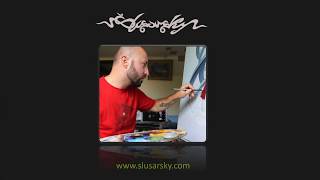 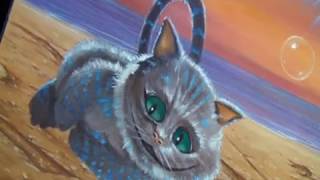 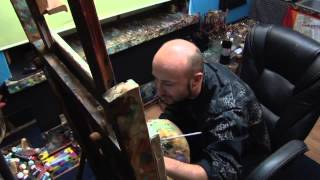 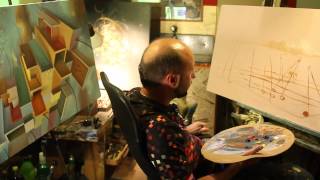